Event Report: Create your own Cult, the Scientology Way 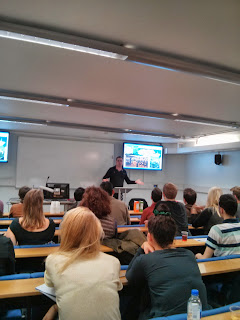 For our first event of the year, we were lucky enough to have Martin Poulter come and speak to us on Scientology - from a pretty funny and skeptical point of view.

Scientology might have started out as part of the American landscape, but there is no denying that England has not escaped Lafayette Ronald Hubbard's cult. Just think about the Scientology bookshop on Tottenham Court Road, and just think about the fact that the followers of Scientology are pushing for religious recognition in the United Kingdom - Scientology has come to this country, and it is here to stay.

Scientology has achieved media recognition via different means. It has sparkled Internet wars, and it has gained the approval of key A-list Hollywood celebrities, and it has accumulated enormous quantities of money - but how did it all begin?

Poulter, a self-described cult-watcher, knows much about Scientology - and what he had to share with us amused and horrified us in equal measures. He gave us a checklist of key points to keep in mind if we ever decided to create our own successful cult, by analyzing, in a humorous, insightful manner, the beginning and evolution of the cult of Scientology - born from the mind of a man who knew how to create and sustain a myth worth millions of dollars.

The Scientology method is an onion-shaped construction that relies on deception, hard work, layers upon layers of cult beliefs and spiritual undertakings, the preference of the strong over the weak, and the crucial recruitment of new followers through any means necessary - be it preying on victims of disasters or faking being a helpline.

If you wanted to start your own cult, all you'd have to do is follow a number of simple rules: create a myth. Make following your cult a difficult but rewarding job. Interpret the doctrine for your followers. Give your followers layers upon layers of steps to undertake in the workings of your cult. Make your followers work for a productive living.

Poulter sketched out for us an intensely funny vision of Scientology as a cult that should invite not only derision but also a sort of keenly unwanted respect - for all they have managed to achieve, often in underhanded ways, in so few years. And remember - if you ever felt like creating your own cult, do not forget to remember about the power of the Internet - and try not to make the Internet your enemy.

Posted by UCLU Atheist, Secularist, and Humanist Society at 00:25 No comments:

This is the official UCL Atheist, Secularist and Humanist Society (ASHS) Facebook group. Join us here to get involved in our events and socials, share and discuss links, and get all updates on society happenings!